Paragliding could easily be viewed as one of the more extreme sports available to Alpine adventurers. Alpinehikers employee, Mike Cullen, found it was surprisingly accessible and a ton of fun.

I try to do one deliberately stupid thing every year.  (This generally brings my annual total of stupid things to about 783.)  In 2014 my willful act of stupidity was binding my body to another man with cordura strapping on a clear, crisp September morning in Switzerland, then running clumsily down a steep grassy hill together while he yelled “Fass-tair! Faahstair!,” in his thick French accent.  I’d only just met this man a few minutes earlier. His name was Fabian (Fah-bee-yahn. ) He was from Geneva.

You should know, there was a real-deal three-thousand-foot cliff at the end of this short hill. Making my body run “Fass-tair!” went against all my best instincts. My life, or at least the last few days, flashed before my eyes: my wife Layla and I meeting with our tour group in Grindelwald four days before, seeing the happy glow in the eyes of those who had tried paragliding, my (crazy) determination to try it myself…

I don’t usually do things like this, but I had thought, “Well, they look like normal people, and they did it.  And I am normalish, so…” By the time this morning rolled around, I had seen so many paragliders floating around the Lauterbrunnen valley – not to mention the base jumping flying- squirrel-suited lunatics that were only detectable when their chutes flummpt open a few hundred feet above you – that I got pretty used to the idea of potentially suicidal recreational adventure. That is, until this moment.

Strapped together and (thankfully) connected to our small parachute, Fabian and I galloped crazily down the hillside like one of those two-man horse costumes.  My wife stood off to the left shouting “Wuh-Hooooooo!  Yeah!” and recording the whole thing with her iPhone. I closed my eyes.

Airborne against my better judgment, we glided smoothly along the valley walls, nearly 3ooo feet above the tiny village of Stechelberg.

Paragliding is a popular alpine activity, done in tandom with an expert.  It is offered locally at most alpine resorts, and often involves taking a cable car or train up to a higher launching point before setting sail for a 10-20 minute ride down.  Costs might typically run from CHF 150-250, depending on where and how long you are flying.  It’s not for everyone, but definitely an adventure to remember! 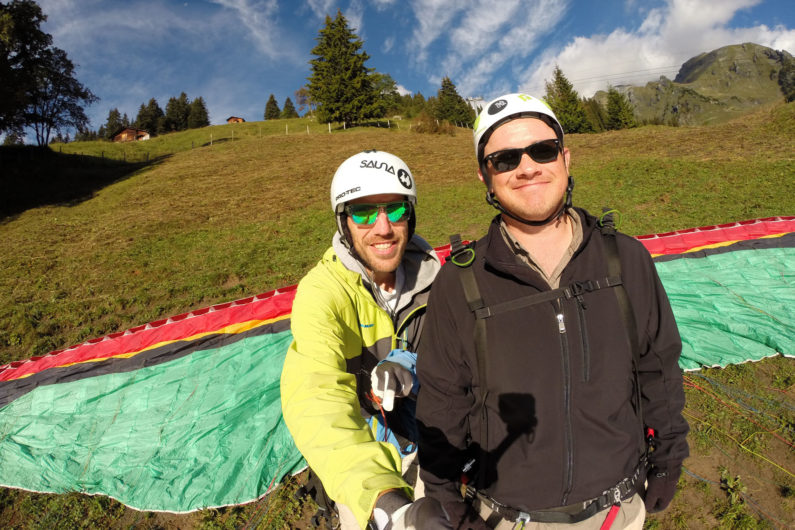 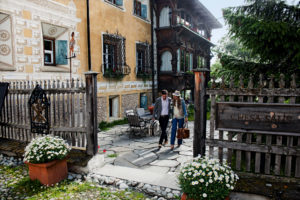 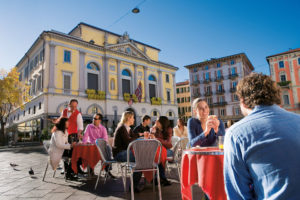 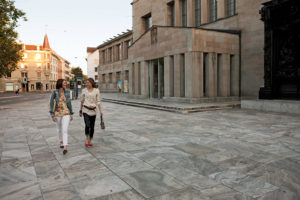